Our Region’s residents are as diverse as its landscape. We are students and teachers, mothers and grandfathers, farmers, nurses, and entrepreneurs. In this section, we’ll explore indicators about our population’s demographics. 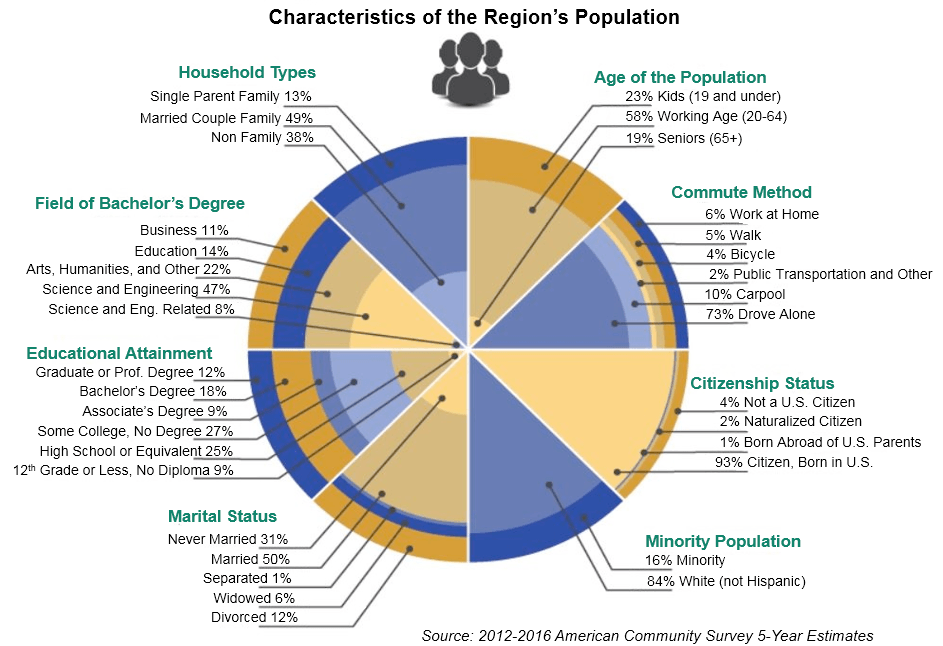 While our Region celebrates diversity, understanding our most common traits is helpful to making long-lasting and impactful decisions that strengthen our communities and the individuals living in them.

A Region’s diversity cannot be summed up in any one person, but averages can tell us a story.

Our Region’s typical resident is named Jennifer, is 39 years old, is married, has two children, and is a high school graduate, with some college education.

How did we go about determining the traits of this typical person?

Data about the economic and demographic makeup of a Region can provide a broad overview of the commonalities among our Region’s residents. Taking several factors into consideration, the profile of an “average” resident emerges. For example, the demographic graphic above shows us some of these common traits; we know that 50% of our Region’s residents over the age of 14 are married. We also know from the U.S. Social Security Administration that “Jennifer” was the most common name given to females born in Oregon in 1976; since 39 is the average age of residents in our Region, 1976 is her birth year. Why a female and not a male? Because there are more women than men in the Region, as shown on the age distribution chart below.

Why is Jennifer important?

By understanding similar attributes, local elected officials, business leaders, nonprofit associations, and OCWCOG can use this information, and similar data to make decisions in the public and private space, regarding funding priorities, development opportunities, etc. This information assists community leaders in answering questions about its residents. 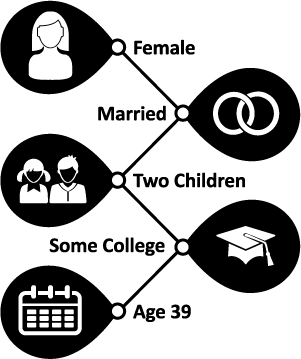 Our Region has seen steady population growth over the past several decades. The annual growth from 1960 to 2017 was 1.4 percent, slightly less than the State’s 1.5 percent, but above the national rate of 1.1 percent.

Growth in the Region has slowed, however, as the U.S. Census Bureau and Portland State University Population Center report. The annual growth rate from 2010-2017 was estimated at just 0.7 percent. This slower growth is projected to continue. According to the State of Oregon’s long-term population forecasts, our Region is projected to grow at an annual rate of 0.9 percent over the next ten years.

This Annual Population Growth Rates chart shows that among OCWCOG and its peer Regions, all four Regions have growth rates that are above the nations, and all of them have population growth rates that are generally trending up, compared to the nation which is relatively flat. Population growth comes from natural increase (births less deaths) and migration. Most of the growth in our Region comes from positive net migration.

For information about the demographics of people who are moving into our Region from other places in Oregon, and beyond, see Migration.

For more information about our peer Regions, see Peer Regions. 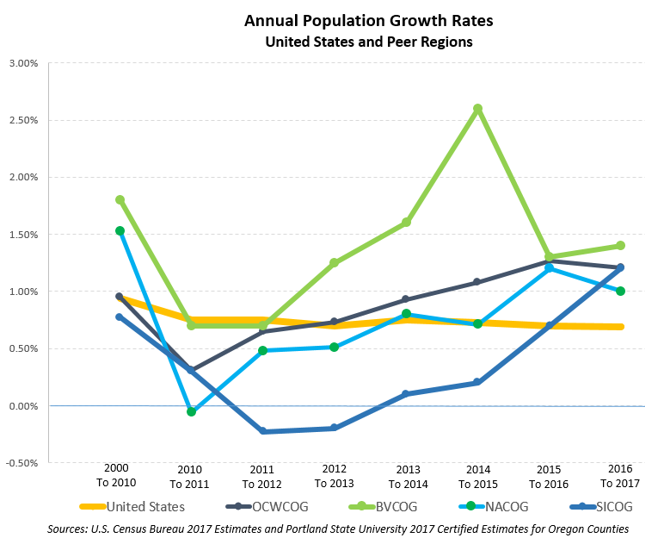 Our Region is experiencing two trends in relation to its population.

First, the overall population is aging. This can be attributed in part to the large number of baby boomers (born 1946-1964) reaching their senior years. According to 2017 population estimates, baby boomers make up 25 percent of the Region’s population. This trend is also attributed to an influx of first- and second-wave retirees (those who have recently retired, and those who have been retired for many years).

Second, the Region attracts many young adults, due in part to those moving here to attend our university and community colleges. Members of the millennial generation, who are now in their college years, make up 26 percent of the Region’s population, according to the 2017 population estimates. For more on the Region’s education, see Community and Health Indicators.

Across the Region, the age distribution looks quite different from County-to-County. As expected, Benton County, home of Oregon State University (OSU), has a large college-age population. In Lincoln County, almost the reverse is true, and baby boomers are the largest segment of the population. Linn County, the most populous county in the Region, has a balanced age distribution.

The Region’s population was estimated to be 49.4 percent male and 50.6 percent female. As shown in the population pyramid below, the distribution of the population has changed dramatically over the last three decades as the baby boomers went from young adults to near retirement. 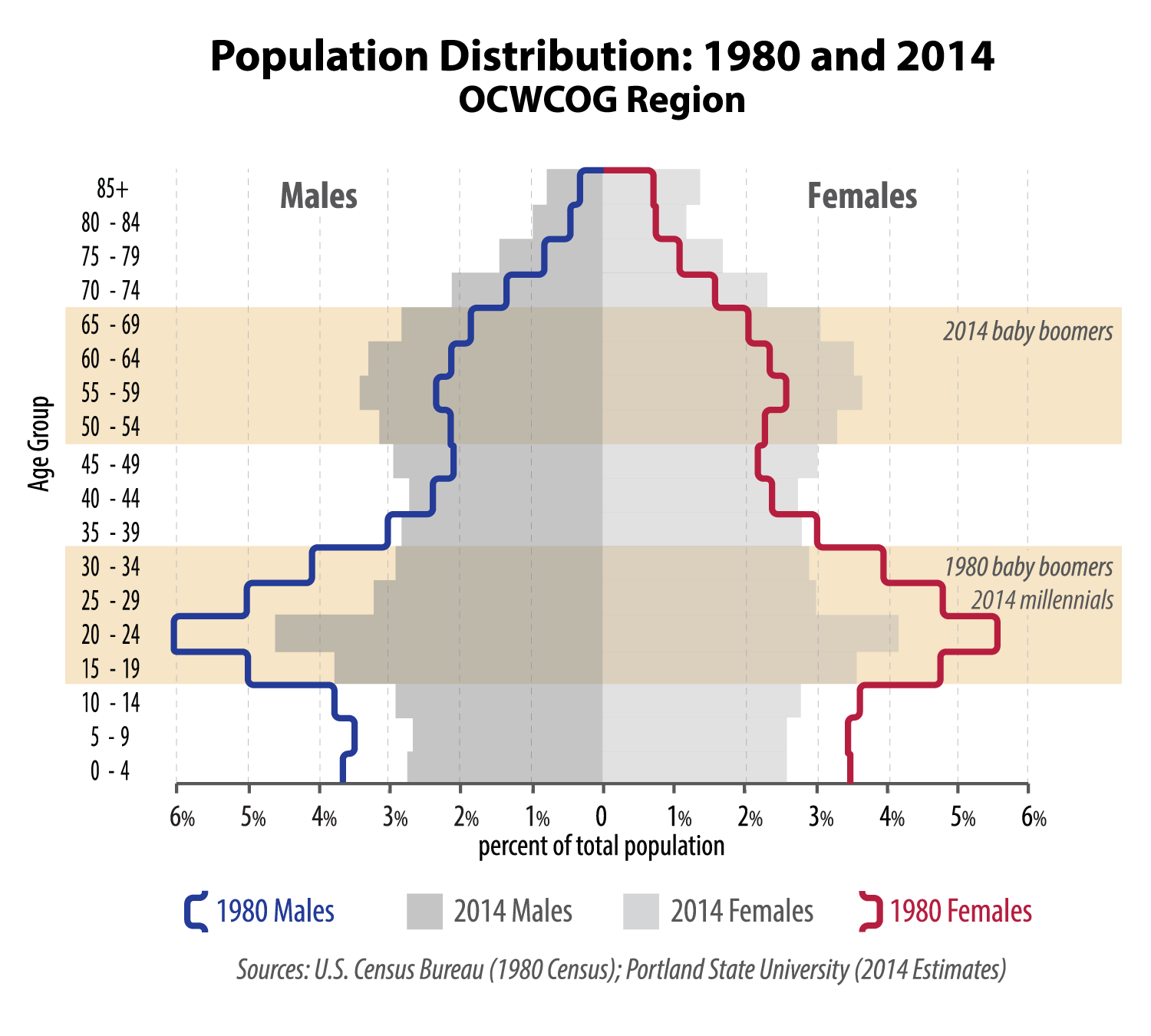 The U.S. Census Bureau estimates that in 2016, 83.6 percent of the Region’s population identified as non-Hispanic white, down from 84.3 percent in 2014, while Asian/Pacific Islanders had the largest increase during this period – up 0.8% from 2014.

According to 2016 estimates from the U.S. Census Bureau, 96.1 percent of Benton County residents speak English “very well,” 96.8 percent in Lincoln County, and 98 percent in Linn County.

For information about how much residents in the Region spend on housing, see Housing. 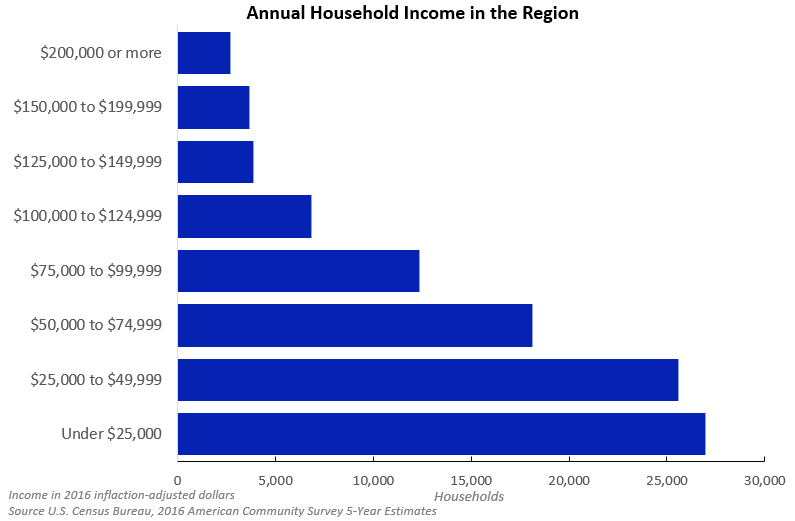 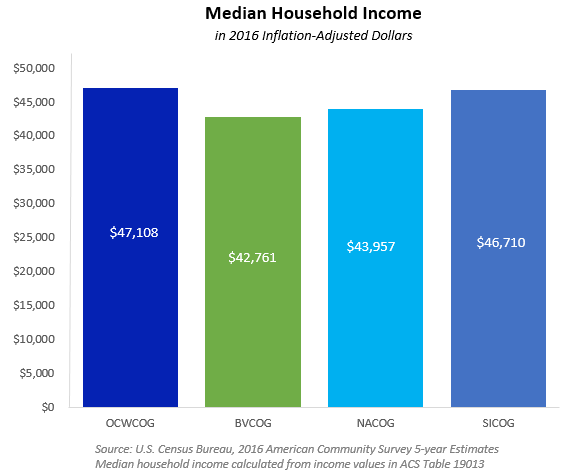 As the economy continues to recover from the recession that began in late 2007, unemployment rates begin to drop in our Region.

Linn County’s unemployment peaked in March of 2009, at 15.4 percent. Benton County saw the least impact from the recession, peaking at 8.9 percent in July 2009, mostly due to the strong influence of OSU employment. Lincoln County, with its high employment in tourism-related jobs, had peak unemployment during the recession of 12.4 percent in March 2009. It dropped significantly after that down to 8.8 percent in September of 2009, only to pick up again and peak slightly above the recession number at 12.6 percent in January 2010.