There are many ways to define health access, from cultural and language needs to transportation, provider and service availability, insurance coverage, socioeconomics, community design, and other factors. In this section, we’ll provide an overview of a few metrics.

The Affordable Care Act (ACA) began implementation in late 2010. At that time, an estimated 16.7 percent of Oregonians were without health insurance. In the Region, the number was close to 16 percent. According to the data sourced above, the percent of people who were uninsured in Oregon dropped 11 points between 2010 and 2014. The Region saw a more dramatic decrease: the number of uninsured dropped 12.6 percentage points. As of 2014, only 3.3 percent of the Region’s residents are uninsured. This means that over 31,000 more people in the Region are estimated to have medical insurance now than did so in 2010. 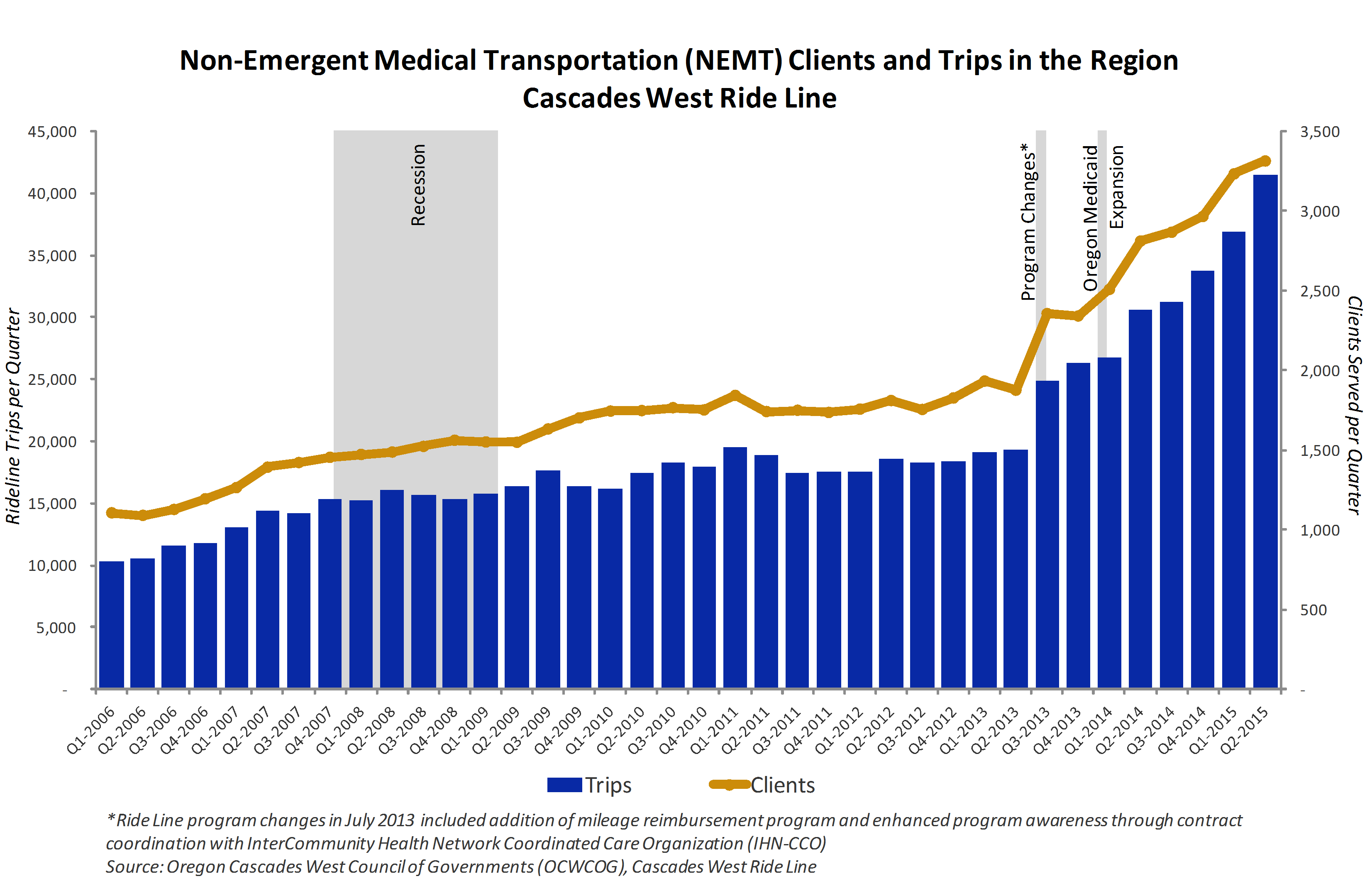 This chart shows that the number of adult care facilities in our Region has remained fairly steady over the past ten years.

There are 598 adult-foster-home beds in the Region, 1,175 assisted-living-facility beds, 800 nursing-facility beds, and 309 residential-care-facility beds, according to June 2015 data from the Oregon Department of Human Services. Our Region’s population is aging. (To explore our Region’s demographics, visit Who We Are.) According to estimates from the Centers for Disease Control and Prevention, 7.2 percent of non-institutionalized people age 65 and older in the U.S. need help from other people for their personal care. The population age 65 and older in the Region was 45,700 in 2014, according to the Portland State University Population Research Center, and the number of non-institutionalized people age 65 and older estimated to need help with personal care was 3,300.

The population centers of our Region are well covered by urban and rural fire districts, while broad swaths of rural areas are covered by Oregon Department of Forestry Protection Districts. 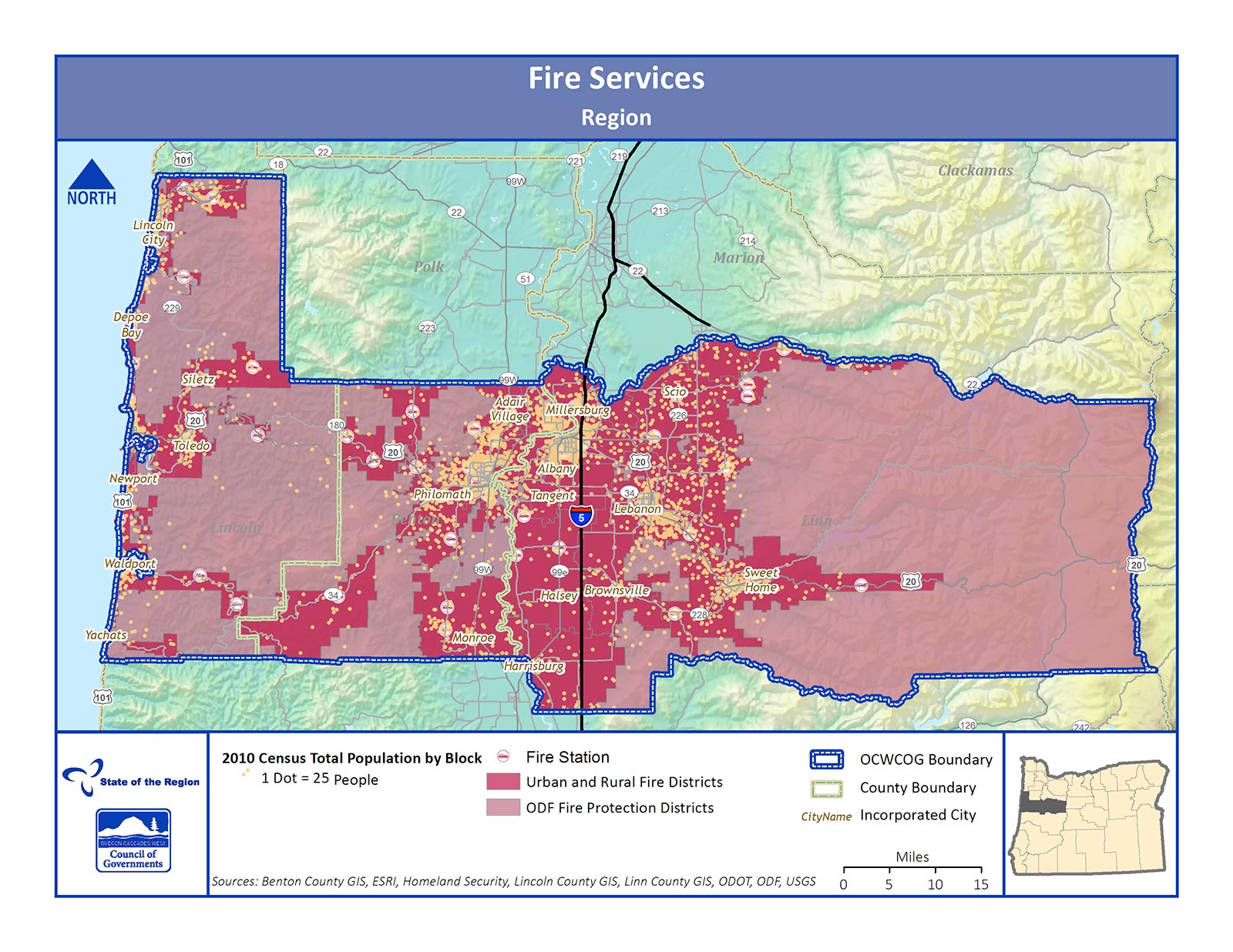 As indicated in the map below, population centers and rural areas are all covered by ambulance services. Ambulance response times will vary based on service area size, required travel distances to/from incidents, and modes of transportation (ground or air). 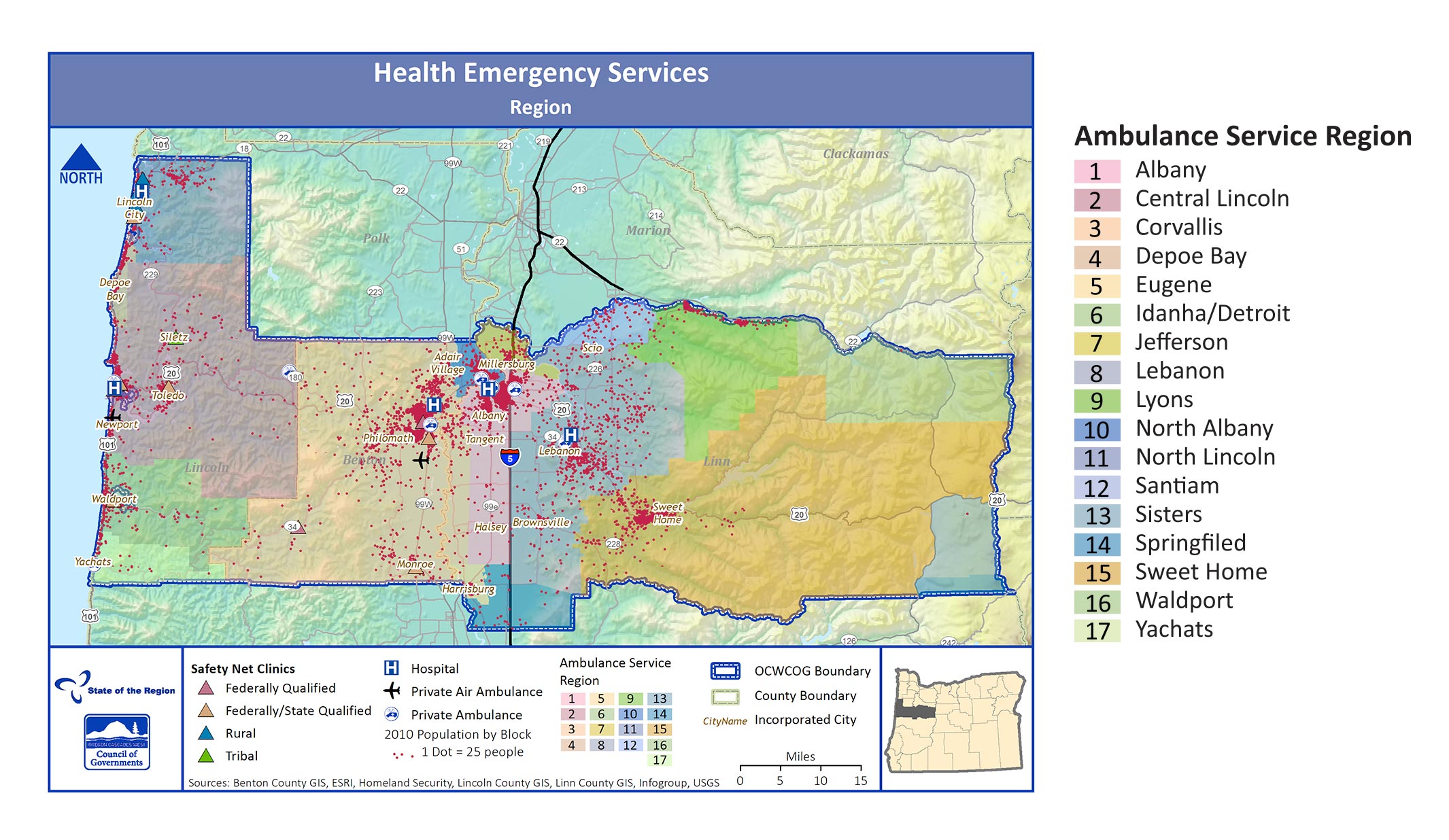 The average daily density of fine particulate matter in the air throughout the Region is estimated to be 8.6 micrograms per cubic meter, below the State’s estimated 8.9 average. Sources of fine particulate matter (also referred to as PM2.5) can include forest fires, power plants, industrial processes, and automobiles. Consequences of ambient air pollution include decreased lung function, chronic bronchitis, and asthma. Particulate counts in the Region are declining as of the latest estimates.

The estimated percentage of people in the Region who have access to exercise opportunities (82 percent) is slightly lower than the statewide estimate (89 percent).