There are many ways to measure a community’s health and livability. In this section, a sample of community, health, and education indicators for the Region is explored.

Educational attainment is a crucial component of economic success and participation in the Region’s workforce. 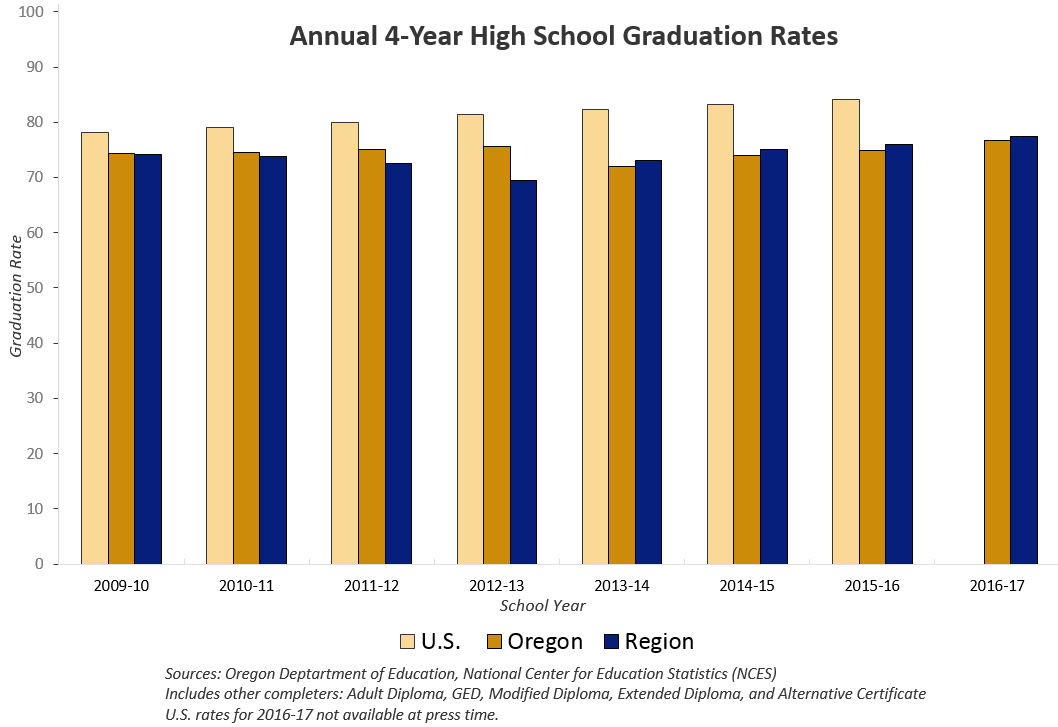 At Oregon State University (OSU), the top degree awarded in 2016-2017 was the Bachelor of Science in the College of Health and Human Services, Human Development, and Family Sciences program (340 degrees). OSU awarded 7,097 total degrees in the 2016-2017 academic year. Over its history, OSU has awarded 243,081 degrees.

Data from the Oregon Department of Education show that over the past nine school years, Region-wide public-school enrollment in K-12 had – while somewhat inconsistent – a one percent annual growth rate. This is compared to just 0.3 percent Statewide. 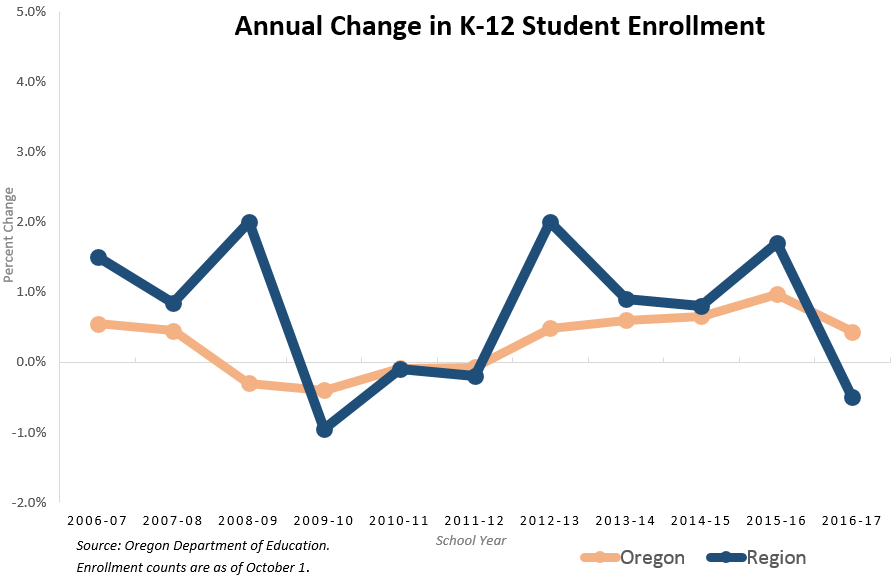 Dropout rate trends are similar to enrollment trends, with a decline in the recession years – when enrollment declined – and higher dropout rates as enrollment increased from 2011 to 2012. 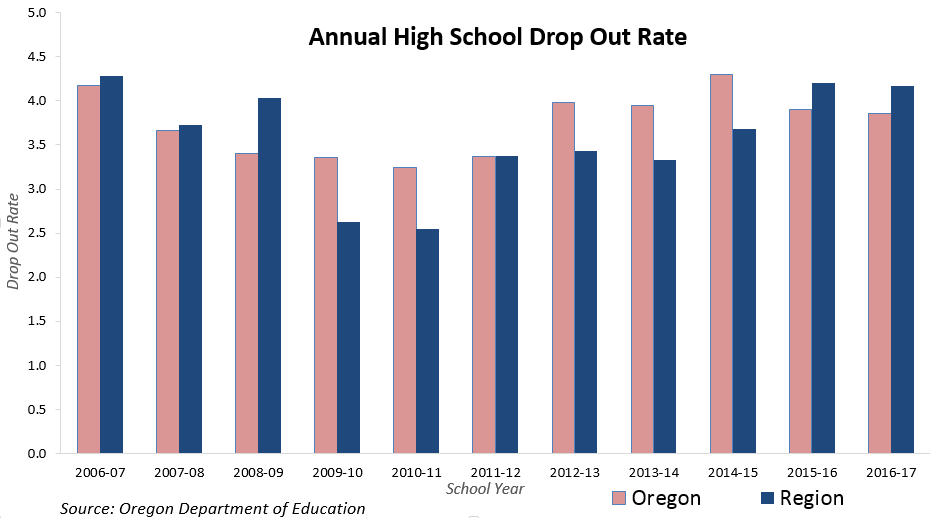 Spending per student was on the rise until the recession. The recession contributed to lower operating expenditures per student from the 2008 school year through 2011. In 2012, spending levels increased modestly and were forecasted to increase for 2013-2014 as well.

A note on the 2011-2012 spike in expenditures in Lincoln County: In 2013, Lincoln County School District completed a project to move all schools out of tsunami zones. A new Waldport High School building was constructed as part of this effort, and six other school sites saw major renovations and additions including portable buildings, band rooms, offices, and gyms.

All capital expenditures in Benton County in 2011 were in the Philomath School District. In 2008, Linn County saw major capital project in the Greater Albany Public School District with some smaller projects in Lebanon and Sweet Home. 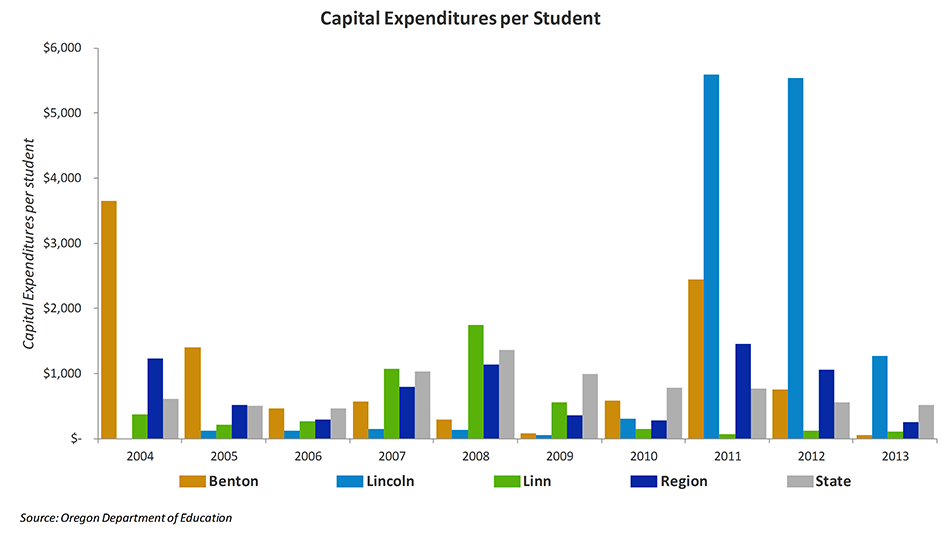 Veterans are an important demographic in our Region. They make up a significant portion of our population, contribute heavily to the economy, and also require significant health care services, as they are a population that is aging and disproportionately disabled. While the number of Veterans in the Region decreased since 2001, expenditures for Veterans services increased over 400 percent. This is similar to the 9.7 percent decrease in the number of Veterans statewide coupled with a large increase in expenditures, over 200 percent, over the same period.

While Veterans in our Region have a lower poverty rate than the general population, they have a higher rate of disability. Over half of Veterans in the Region are 65 or older. 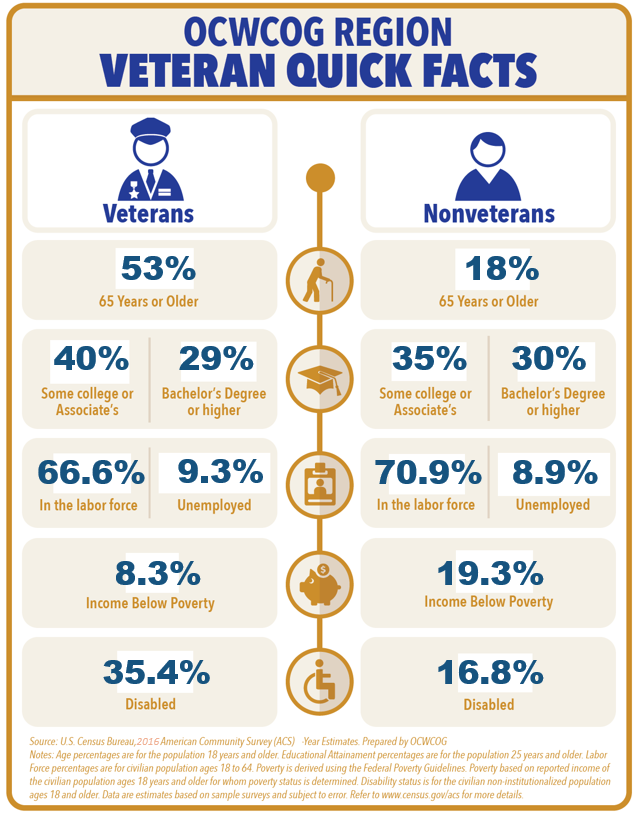 The Benton County Veterans Service Office (VSO) is housed within the OCWCOG. The VSO assists Veterans in applying for programs and services for which they are entitled from U.S. Department of Veterans Affairs (VA) claims and benefits. In the period of time from July 1 to September 30, 2017, the VSO provided services to approximately 946 of the estimated 6,100 veterans in Benton County (15 percent).

According to U.S. Census Bureau estimates on disability, the Region has a higher percentage of total residents with a disability (16 percent) than the state (14.7 percent) and the nation overall (12.5 percent). In the Region, 51.0 percent of the population that has a disability is age 18-64. The percentage of people in the Region, with a disability that affects their ability to live independently (for example, doing errands or attending medical appointments), is 6.6 percent, slightly higher than in the State and the nation overall.

Notes: Disability is determined for the civilian, non-institutionalized population. The U.S. Census Bureau defines disability as a having one or more of the following difficulties: hearing, vision, cognitive, ambulatory, self-care, or independent living. An independent living difficulty is one which, due to a physical, mental, or emotional condition, an individual has difficulty doing errands alone, such as visiting a doctor’s office or shopping. Refer to the U.S. Census Bureau for additional information on these data. 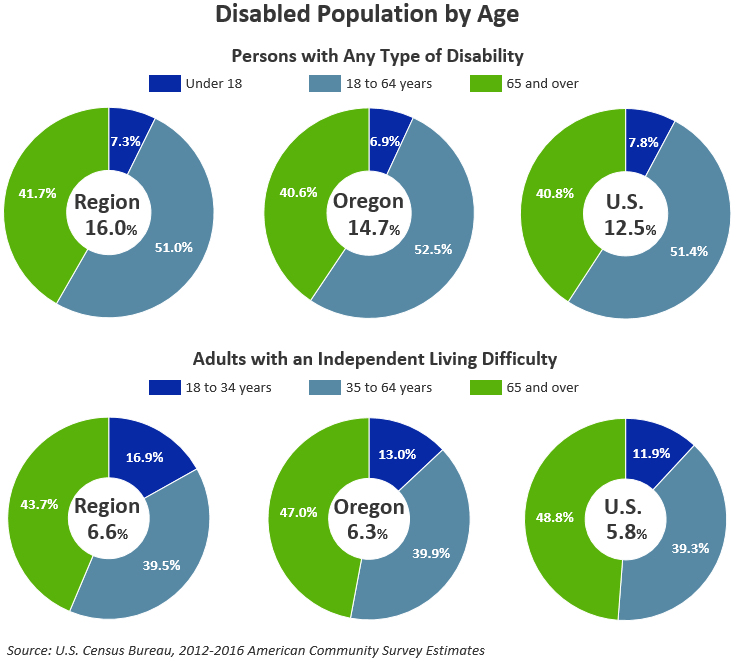 Across the Region local agencies annually conduct a Point In Time count of the homeless population. For the years in which data are available, 2013 saw the largest number of homeless persons in the Region. According to annual Point in Time counts, in 2017, the majority of homeless residents in the Region were between the ages of 18 and 54. 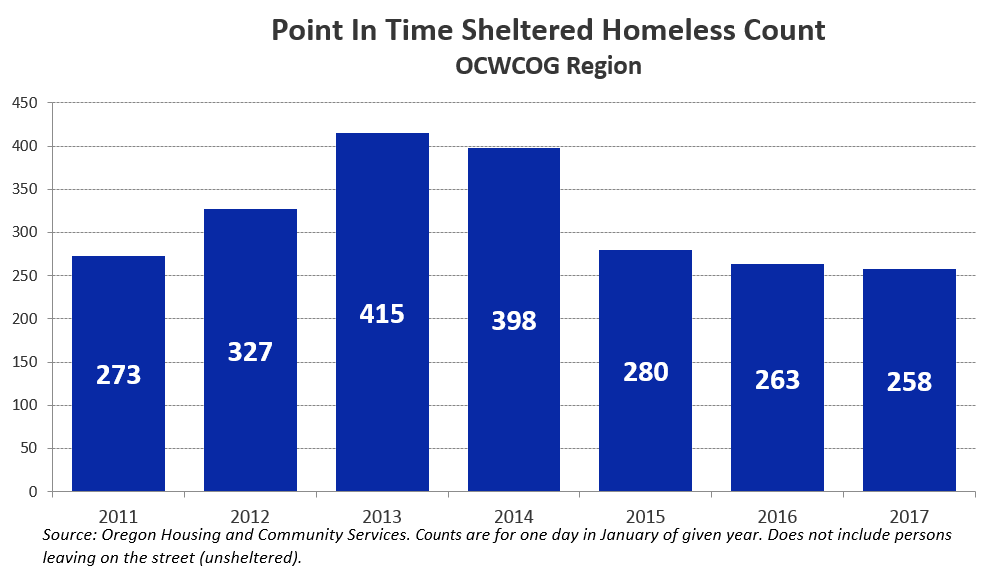 Age, Gender, and Race of the Homeless Population

Most homeless people in the Region were male and over 24 in age, according to the Point in Time 2017 counts. 77 percent of those counted were non-Hispanic white, lower than the Region’s population in general which the Census Bureau 2016 estimates show to be 84.3 percent white, non-Hispanic. 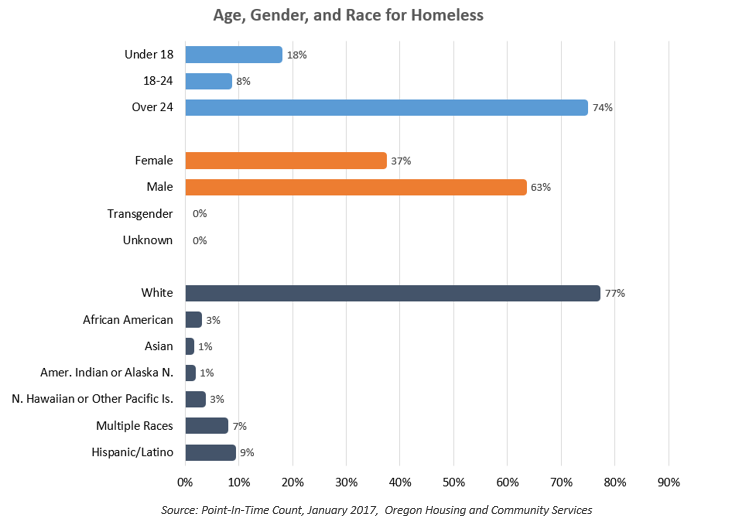 The Oregon Department of Education (ED) reported that there were 1,606 homeless K-12 grade public school students in the Region in 2013. This equates to 4.4 percent of all public-school students in the Region. Statewide, 3.3 percent of students are homeless. The Region saw a dramatic increase in student homelessness from 2007 to 2008, with an increase of slightly more than 500 homeless students. However, that number decreased by 300 the following year.

Homeless students have a variety of living situations, with the majority (79.3 percent in the 2013-14 school year) sharing homes with relatives or friends due to economic hardship (“doubled-up”). According to Oregon ED statistics, over 150 students in the Region are classified as “unsheltered,” reportedly living in cars, trailers, parks, public spaces, substandard housing, abandoned buildings, or similar settings that are not designed as regular sleeping accommodations. 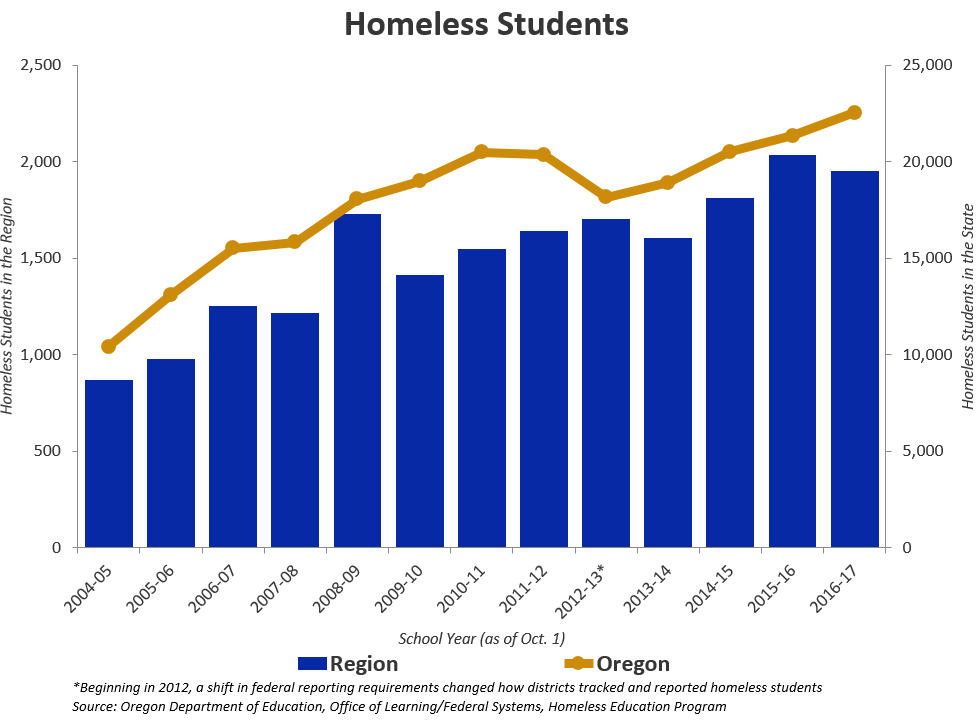 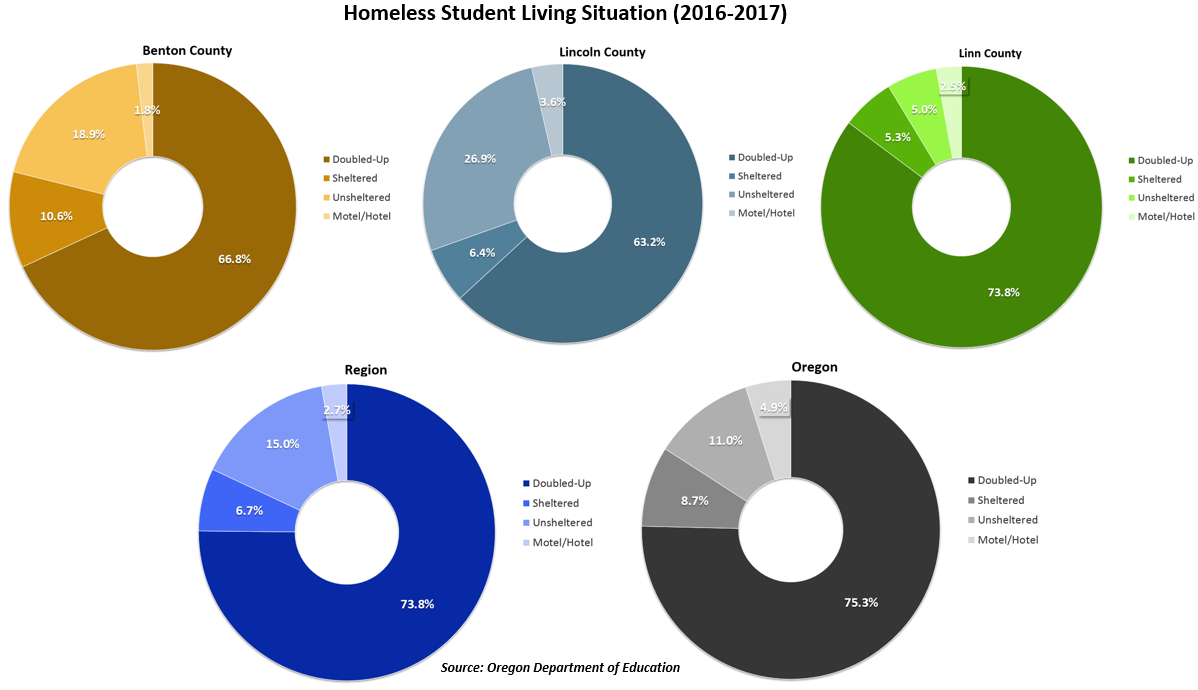 According to the U.S. Census Bureau’s most recent estimates for poverty, 15.7 percent of the Region’s residents (for whom poverty status is determined) reported income below the Federal poverty level in 2016 and 19.2 percent of the households received Supplemental Nutrition Assistance Program (SNAP) benefits. The number of participants can be higher than the number of people in poverty, because the program’s gross income limits are higher than 100 percent of the Federal poverty level. SNAP participation in the Region has only recently started to show signs of decreasing after several years of increases. 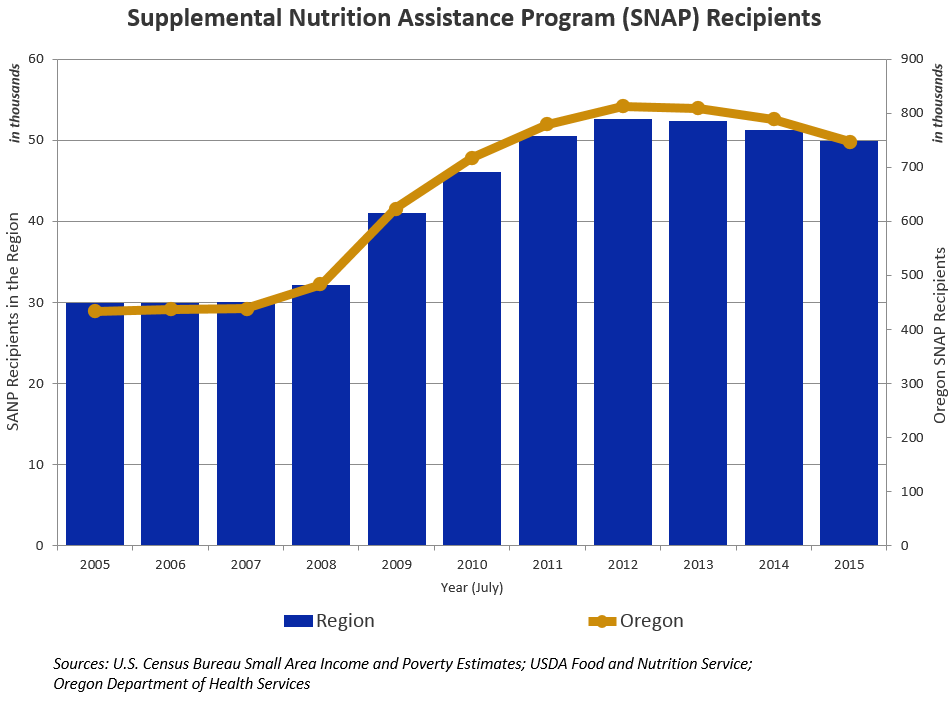 Participation rates show the percent of eligible people who receive SNAP benefits. Eligibility includes a number of factors based on both net and gross income, along with value of assets. The increase in Lincoln County in 2011 is traced to a drop in the estimate of people in poverty. An anomaly here is that Benton and Linn Counties each had more people in poverty for 2011, than in either 2010 or 2012.

The average monthly SNAP benefit per person is just under $125, or $1.39 per meal. Benefits are consistent with the State, with some small fluctuations in 2011 and 2012. 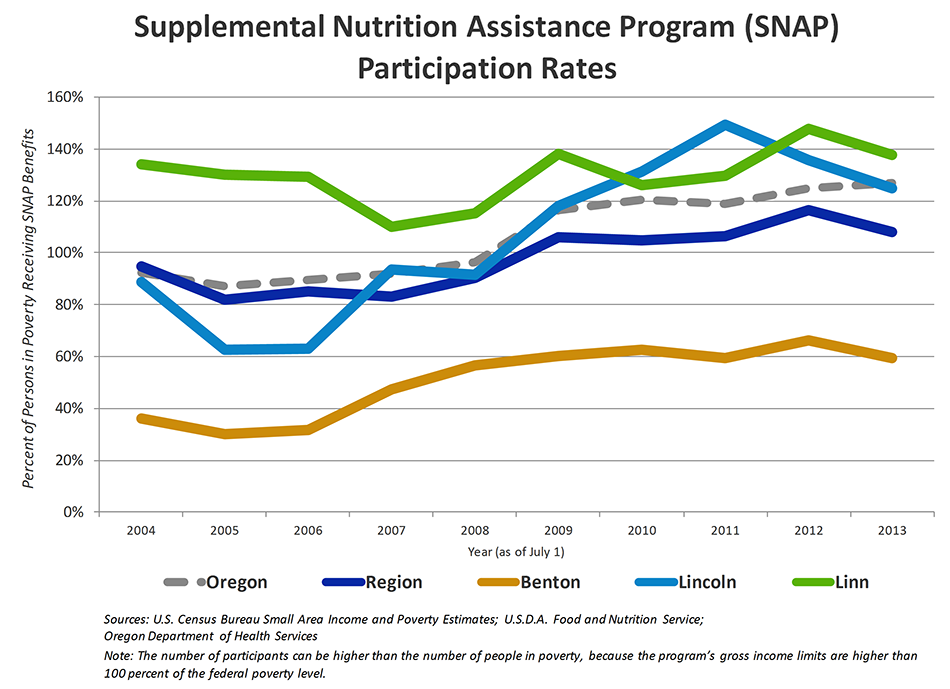 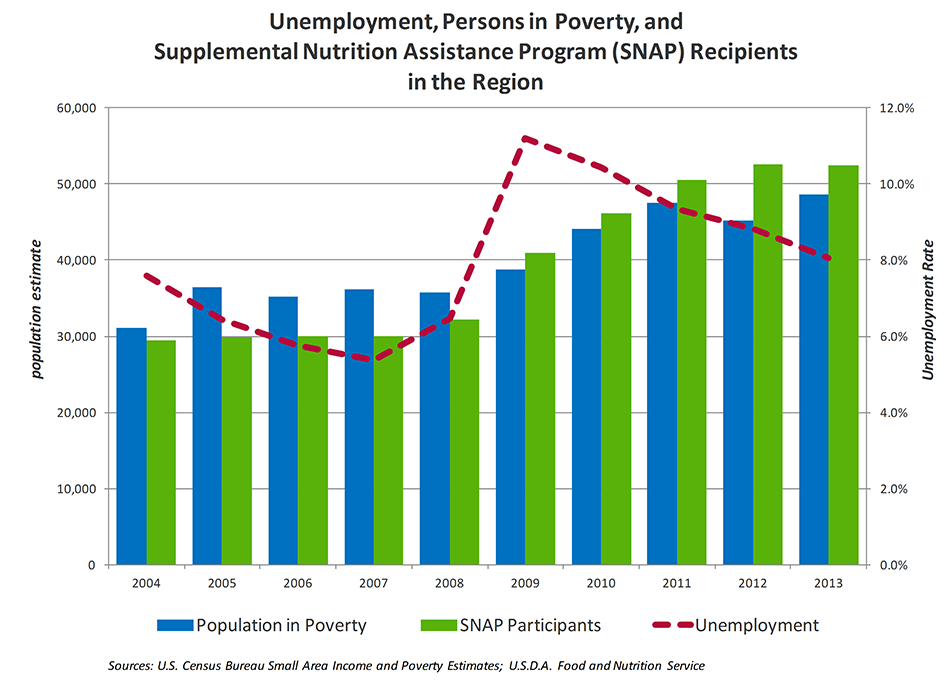 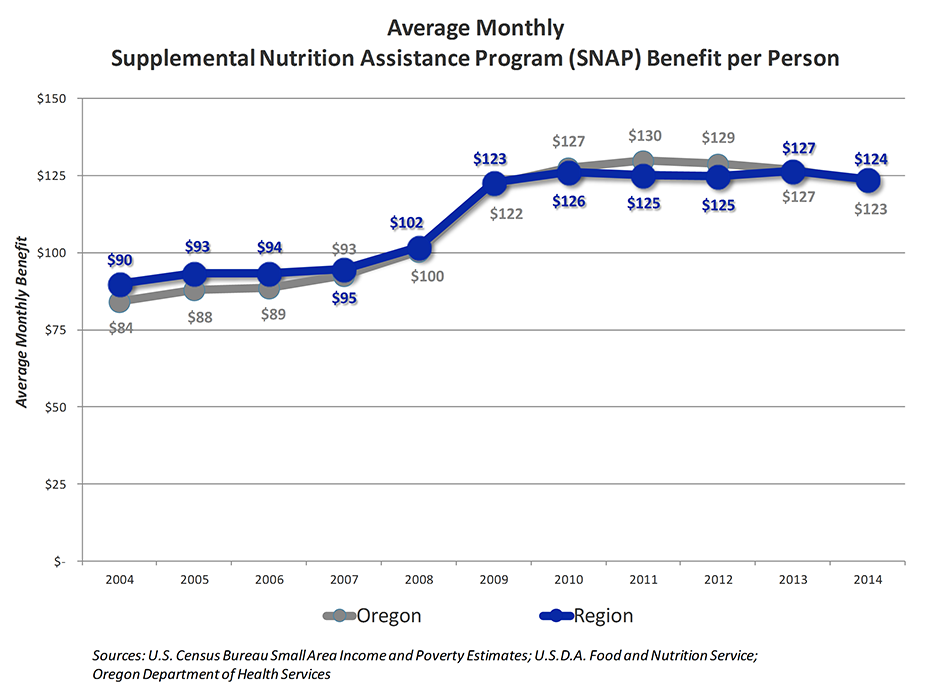 According to the U.S. Social Security Administration’s (SSA) guidelines, the Supplemental Security Income (SSI) program provides monthly cash payments to people who are 65 and older, as well as those who are blind or disabled, whose countable income is less than $5,808 per year (or is less than a combined income of $8,712 for a couple with both eligible), as of January 1, 1997. In most cases, ownership of financial assets is limited to $2,000 for an individual or $3,000 for a couple. Annual data from the SSA show that since 2007, the State and the Region have experienced an annual growth rate of SSI recipients of slightly more than four percent, at 4.2 percent and 4.5 percent, respectively. In 2016, this amounted to 2.1 percent of the population in the State receiving SSI, closely comparable to the Region’s 2.2 percent. 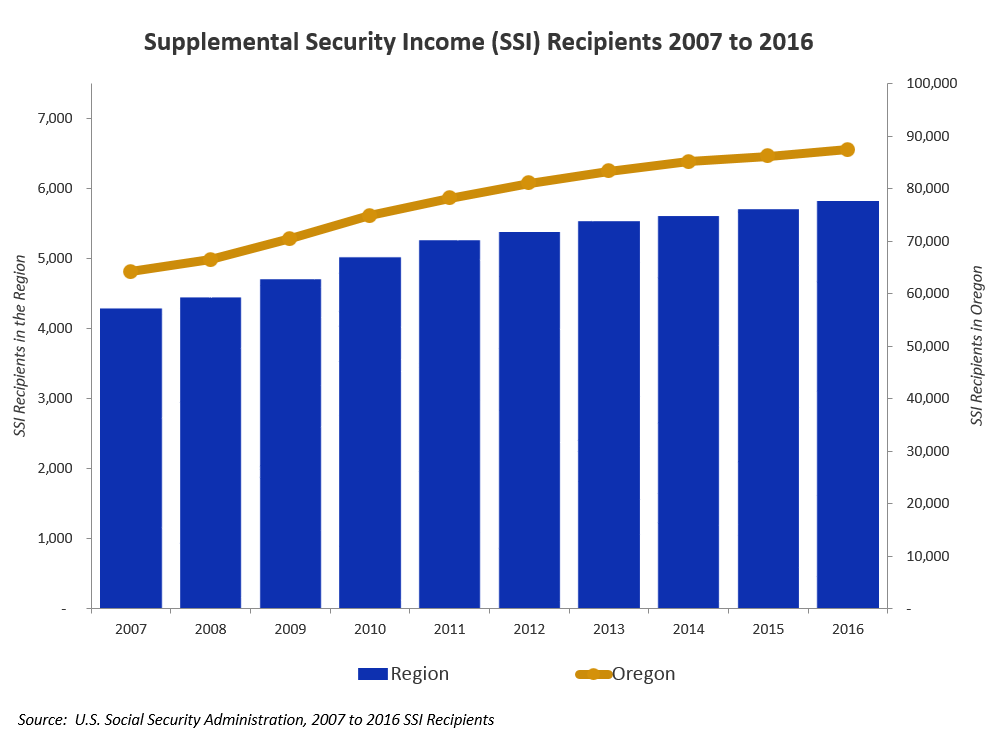 Obesity is defined as a body mass index (BMI) of 30.0 or greater in adults age 20 or older. According to the Centers for Disease Control and Prevention, the estimated percent of adults who reported a BMI of 30.0 or higher in the Region is 28.4 percent, higher than the State (26.5) and about the same as the nation (28.3).

This chart shows that our Region’s obesity rate aligns closely with the national rates from 2004-2012. Also, the Region has a lower overall obesity rate than two of our three peer Regions.